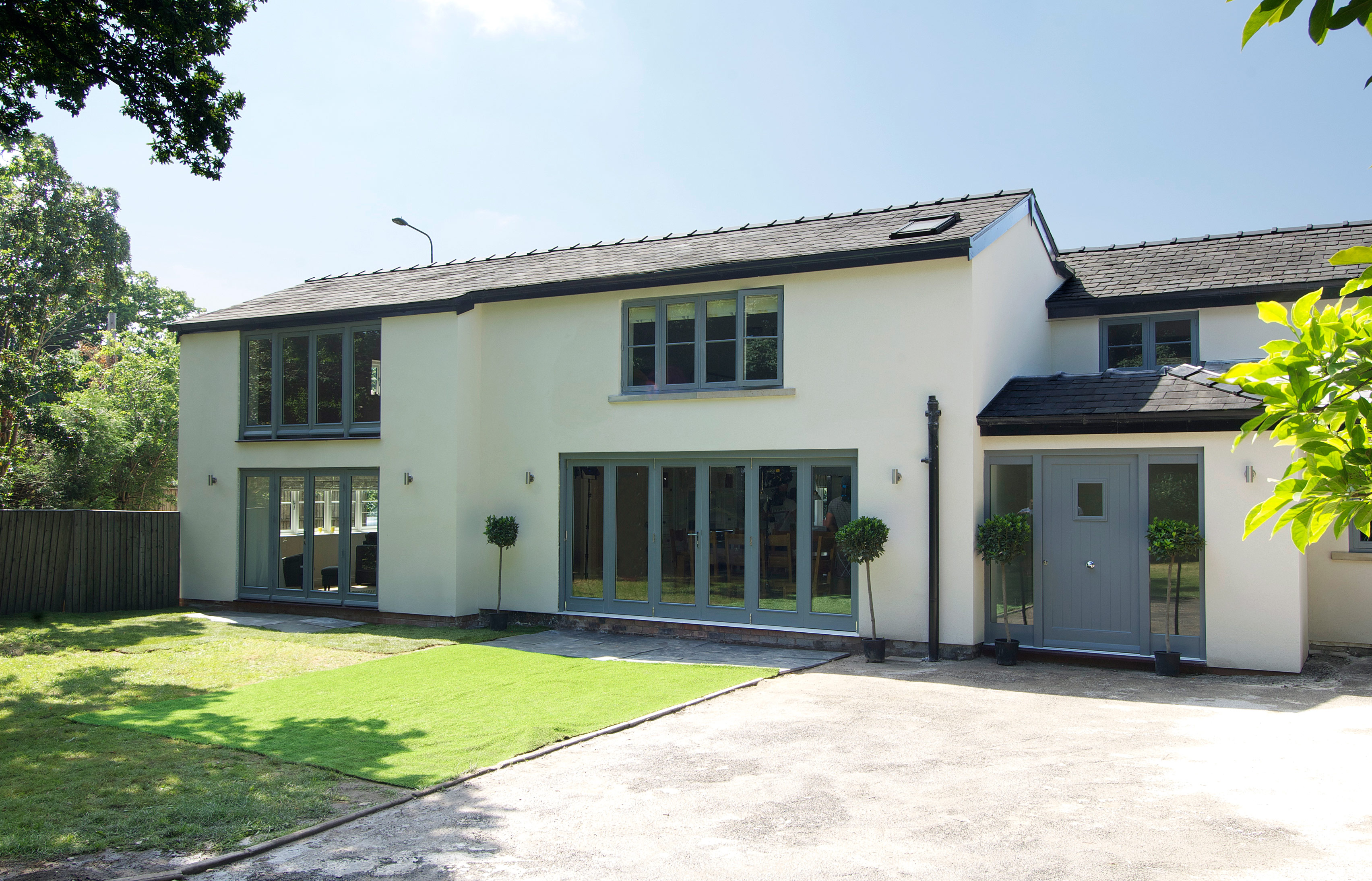 When Mark and Rebecca Ridley married and pooled their property portfolio they became financially able to take a positive step up the property ladder. They fell in love with a 200-year-old cottage in Chalford, set within Cheshire’s sought after Golden Mile, which they purchased in 2006 for £400,000. They always knew that work would be needed to bring it up to 21st Century living standards. While the accommodation was roomy, offering three reception rooms and three bedrooms, the couple now have two children who require plenty of space. In addition, both Mark and Rebecca’s aging parents live a substantial 150 miles journey-time away in opposite directions and with no other grandchildren to share it was important to provide the accommodation, comfort and privacy they need when visiting regularly.

Mark, a mechanical engineer and project manager on the build, says: “Initially, we worked with our architect to draw up plans for an extension and for us it was as important to maintain the character of the cottage as it was to improve our living conditions.”  The property is of Cheshire brick construction, with a render finishing coat which was in poor condition.  A fabulous blue Welsh slate roof with double pitch has been mostly retained with just some subtle changes.  The cottage had no insulation to speak of – not in the roof, nor under the floor, and with a single skin brick substrate there was no space for cavity insulation either.

“You would never have seen snow on our roof however hard it came down,” laughs Mark.  “We ran the heating constantly but there was nothing to stop it escaping.  The timber windows, probably some 50 years old, were single glazed, ill fitting, draughty and literally ran with condensation.  The essential secondary glazing was our only protection against noise from the busy Macclesfield to Knutsford M6 route.”

It was when the Ridley’s decided to appeal against their failed planning application that they were inspired by the first series of Sarah Beeny’s Double Your House for Half the Money.  “It was just the kick we needed,” recalls Rebecca, a recruitment specialist and busy mum.  “Our architect revisited the plans and realised the only way to satisfy the local planning department was to retain as much of the original style and character of the property - which is what they wanted to see and it was, after all, the charm of the building that attracted us in the first place.”

With renewed enthusiasm the couple responded to the invitation for homeowners and viewers to apply to be in the second series of the Channel 4 programme.  Following rigorous vetting by the programme’s production company, Red House, and following a successful pilot, the Ridley family and their 200-year old cottage were signed up.

“We’d done a lot of homework and technical research of our own by this time but we valued the help and advice of our architect and builder,” said Mark.  The couple were already considering triple glazed windows, not just for their thermal efficiency but for their acoustic qualities, but Ms Beeny had other ideas.  She took them to Salford University, a British research University where the efficiency and performance of building materials and systems, such as single, double and triple glazed windows, are analysed.  In simulation, a single glazed window with secondary glazing, just as the Ridley’s had at home, was compared against a triple glazed window.  There was in fact a favourable result for the single glazed combination due to the 125mm space between the two glazed units which acts as a sound barrier.  Ms Beeny proved her point but the Ridley’s were adamant on replacing all the windows and with help and guidance from Mumford & Wood decided on a bespoke double glazed casement with an acoustic glass and glazing specification. In doing so, it massively reduced the Ridley’s window budget and satisfied the planners.

“Mumford & Wood had been recommended to us and they looked at various acoustic options,” says Mark.  “We took the windows and doors cost out of the build budget knowing that it represented a significant proportion of the overall spend – but it was important to get this right.”

The bespoke double glazed window schedule drawn up by Mumford & Wood included 16 flush casements, a six-leaf bi-fold door, two sets of four-panel French doors and an entrance door.  Windows to the street elevation were adapted to accommodate 27mm double glazed units (beyond that of 24mm as standard) made up of 6 and 8mm laminated sound control (or stapid silence) inner and outer glass panes which achieve an acoustic rating of 40dB. This compares with standard double glazing in a Mumford & Wood Conservation™ casement of 34dB.

All products were specified from the award-winning Conservation™ range which has an established reputation for authentic heritage design characteristics that, when combined with modern manufacturing processes, achieve aesthetically beautiful, high performance fenestration solutions.  The company uses only clear-grade engineered timber, which provides strength and stability, eliminating warping and sticking frequently associated with timber, and offers an average of a 60-year life.

Mumford & Wood worked closely with the Ridley’s offering advice and guidance throughout the manufacturing and installation process.  “Everyone has been really helpful but Hats off to Tim!” congratulates Mark, “he has been so helpful and really couldn’t do enough for us.”

Tim Kirk is a regional area sales manager at Mumford & Wood, the Essex-based specialist.  “The Ridley’s chose RAL 7046 Telegray paint finish for products in our Conservation™ collection and together with the style and colour they’ve got a rather contemporary appearance.  We’re very pleased with the finish and it has been a pleasure, if not a challenge, to work to such a demanding build schedule.”

The Ridley family has added a massive 123m² modern extension to the cottage while retaining beams and other architectural detail in the original building.  The property is spacious with attractive features, and provides plenty of space for all the family and accommodation for visiting grandparents.

“We are comfortable and our home is thermally efficient which will help our heating costs and energy consumption – and reduce our carbon footprint, which is important to us,” says Rebecca.  “Road noise is not a problem, we have maximum natural light everywhere in the house, and we love the look and appearance of our smart new home.  We no longer suffer with the inconvenience of secondary glazing or unsightly condensation.”

The family has moved back into the cottage and is looking forward to taking on the last few building tasks themselves which were not completed in time for the final filming of the Ridley episode aired in August 2013.  “Now that filming is over we can work at our own pace and enjoy what we are doing,” says Mark.  “We have achieved what we set out to do in record time, in just six months, and importantly we have reached the programmer’s target.  Our dream home is almost double its original size and we have achieved this for half the money it would have cost us to purchase it finished and complete – something we couldn’t have afforded.

“The cottage is now worth £800,000 in the current market, that’s double our original purchase price.  We exceeded our estimated budget for the extension by £30,000, and there’s still some finishing work to do. We haven’t broken the bank and in these recession-hit times you simply have to take on these challenges,” concludes Mark.  “It’s been a huge journey for us, quite literally a life changing experience, but we’ve done it now.”

“Would we do it again? Probably not; we’ve grown as a family, benefitted financially and made some great friends along the way but we’ve also experienced the pressure, and sometimes the heartache, and once is probably enough in a lifetime.  Now we just want to enjoy and share our lovely home.”

In summing up, Ms Beeny felt that the window specification was probably the most controversial part of the project and believed that the original spent windows should have been renovated rather than replaced.  However, she concedes: “They do look smart and beautiful.”  Mark and Rebecca agree whole heartedly and stand by their decision to install Mumford & Wood Conservation™ products in their beautiful new home.

Mumford & Wood is the leading brand in the Performance Window Group (PWG) alongside those of Timber Windows, Dale, Clearwood and The English Glasshouse.

Mumford & Wood has showrooms in London and Tiptree, Essex and can be contacted on 01621 818155.  Alternatively please visit www.mumfordwood.com for detailed product information.  For the latest updates follow Mumford & Wood on Twitter @mumfordwood 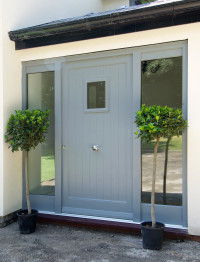 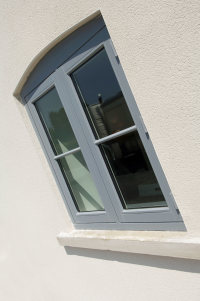 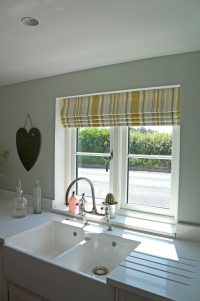