Dating back to the 18th century, Portland Square was one of Bristol’s first suburbs and comprises of mostly Grade I listed Georgian buildings. Unfortunately, over the years, it fell into various states of disrepair after it was bombed heavily during the Second World War and further suffered as a result of rioting in the 1980s.

Following these events, Portland Square developed a bad reputation. However, as a result of a booming economy in the 1990s, restoration and building projects across Bristol began. Buildings that had been completely destroyed in the war were finally rebuilt and thankfully, Portland Square began to recover. Portland Square has Conservation status and so all new buildings were designed to complement the existing Georgian architecture.

As part of this ongoing renovation, both Portland House and 24 Portland Square specified new windows and doors from the Mumford & Wood range. Due to its location within a conservation area, the new traditional sash windows and red entrance doors are a close match to the originals now replaced. These allow magnificent views of the historic St Paul’s Church also situated on Portland Square.

Courtesy of Barnett Developments, the building has been converted into a number of luxury apartments available for purchase and rental. With its central location allowing residents to experience Bristol’s heritage, and in close proximity to local shopping and entertainment amenities, these apartments are in high demand on the market.

When looking back to see how Portland Square stood only a couple of decades ago, it has been a fantastic transformation. The new apartments and rebuilt buildings have given Portland Square a new lease of life and the beautiful new windows and doors from Mumford & Wood have contributed perfectly to this. 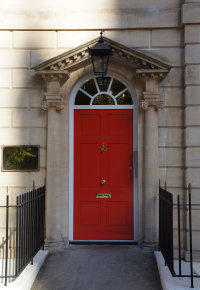 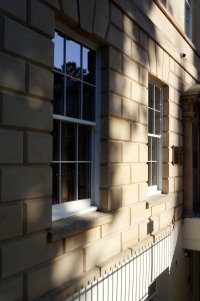